Toured up to Bacon Rind today and skied meadows off of the ridge. Noted many collapses and whumpfs in the snowpack as we ascended east aspects to the ridge. Looking toward Ernie Miller ridge, we noted an old crown in the main bowl just below the summit. It was on an E-NE aspect, 200 or more feet wide and looked to be filled in with new snow but was still visible. Looking east from the top of the ridge, we noted another crown on a west aspect that looked to be about 100' wide and deep.

Dug a pit at 8700' on a W aspect. HS was 70cm. We got an ECTP12 45 cm up from the ground at the interface between wind packed snow and a layer of .5-1mm facets and mixed forms. That layer made up the bottom 45cm of the snowpack in that area.

Dug another pit at 8800' on an E aspect. HS was 115cm. We got an ECTP 14 50cm up from the ground on that same interface as described above. The bottom 50cm of the snowpack looked to be facets and mixed forms. The upper 65cm in that area was a mixture of different layers of wind packed grains that ranged from F to 4F hardness.

Coverage on the descent is adequate, similar if not better than any point midwinter last season. Under skis, the snow in the burn/forest feels unconsolidated and very sugary.

At the saddle between the front and backside of Lick Creek we found 110cm of snow with very dense windslabs. These were firm and cohesive, with the firmest being between 100 and 90cm. Our layer of most concern was at 65cm but was difficult to impact and we felt confident our weight alone even in shallow areas would not impact this layer, we skied the front side however due to time constraints.

We toured to Ernie Miller today and saw a natural avalanche on a NE slope around 9600 ft. We heard and felt multiple collapses on our way in. We dug a pit on an east facing slope around 9300 ft where we found 105 cm of snow. We got a ECTN 2 result, failing on an interface about 15cm from the surface and ECTP5 failing 40 cm from the surface.

From IG 12/3: Hey guys, just getting back from Cooke. Confirming more of what you saw, lots of large natural avalanches up high. Most notable was this massive slide on fox, looks to have broke 2-6’ deep and over 1000’ wide. Couldn’t quite see the toe from our tour but it looked to have run over 1000’ vertical. Never have seen one so large on Fox… we stuck on sub 25° terrain which was hard to move in. Lots of whumphing but not much (if any) cracking...

We dug a pit on a W/WNW slope at around 9100 ft in the republic creek drainage. CT 18 and ECTN34 (ECTX then we hit it extra hard 4 more times) on the weak layer about 70 cm down. But overall snowpack was upright and it seemed to be settling down more than we thought. But then as we approached the ridge we triggered 5 separate large collapses ("Whumphs"), all on WSW/SW slopes (between 8700 and 9200 ft). Pole probes revealed a light crust about 12 inches down.

From IG 12/3: It was natural. Happened last night or this morning. It hadn't slid when we left yesterday. We were first tracks in today, and there were no tracks above or below this slide. Crown at the peak was around 6'. Average 2-3' crown. 10' debris piles at least. 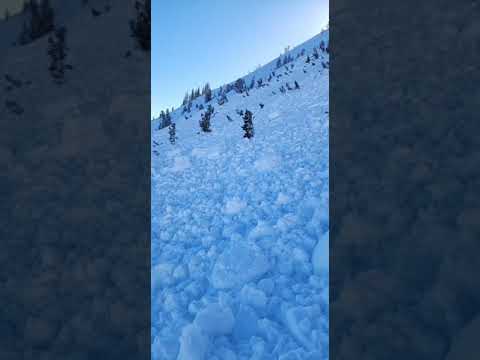 Got some settling on lower angle above base of lift.

We observed no natural avalanches or overt signs of instability, although one group in the parking lot mentioned seeing a small slide south in Sage Basin past the Otter Slide. The foot of new snow was wind affected. Human-triggered avalanches in the new snow and wind slabs were possible. These will stabilize in the next few days unless there is continued loading.

We dug in Carrot Basin and on the slope up to the weather station. We did not find the weak layers of surface hoar or near-surface faceting like at Lionhead Ridge. I am not convinced it doesn’t exist anywhere, but it does not appear to be widespread. Test results were ECTN 11-15 under the foot of new snow. 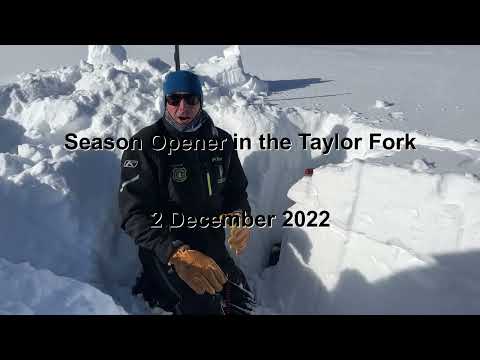 Lots of avalanche activity. Lots of cracking and propagation from the skis.

Near Cooke City (12/2/22) we rode to the cabins at Lulu Pass, then to Round Lake, then to Daisy Pass. Visibility was 50/50, so we didn't see all terrain clearly. We saw multiple large natural avalanches that broke last night or early this morning. The largest were 3 on Scotch Bonnet (R2-D2), 1 on Henderson in the big east facing slide path (R1-D2) and 1 on Old Man Ray's on Republic Mtn (no photo). We also saw 4-5 smaller wind slabs (R1-D1). The larger avalanches we suspect broke on a layer of weak snow that formed last week and is now buried 2-3 feet deep, and deeper on high wind-loaded slopes. In a snowpit on West Henderson we had ECTP23 and ECTP24 about 2 feet deep on a layer of 1mm facets. Below that the snowpack seemed generally strong. Based on the recent natural avalanche activity, this is a weak layer we will have to keep an eye on going forward, and it could produce human-triggered avalanches for at least the next few days. 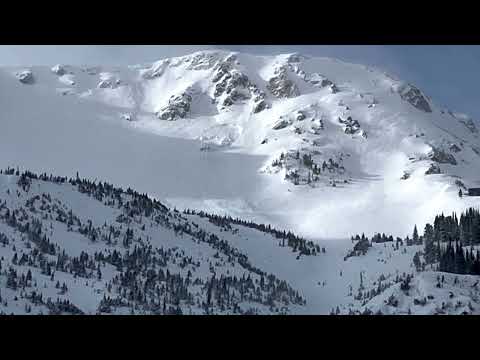 Today our party of three skied Blackmore peak, knowing beforehand the new snow and wind would keep us off the standard East Ridge to the summit, but still wanted to ski a lap on the lower section of that same ridge. Beforehand we were able to easily trigger shallow, short running windslabs by knocking down small cornices. We then headed up to the summit from the largely low angled SE sub-ridge and skied wind scour back to the trail. This lower angle terrain whumped on us a few times, whenever we stepped out of the trees, a hasty hand pit showed a thin sun crust under the new snow interface to be the culprit. Thought the attached picture may help some folks decided on weekend plans. Thanks!

We rode near Cooke City where more than 20" of snow has fallen since yesterday morning, and more snow is expected tonight. This new snow creates dangerous avalanche conditions and we expect natural and human-triggered avalanches over the next 24-72 hours. While touring on skis we experienced a couple large collapses. 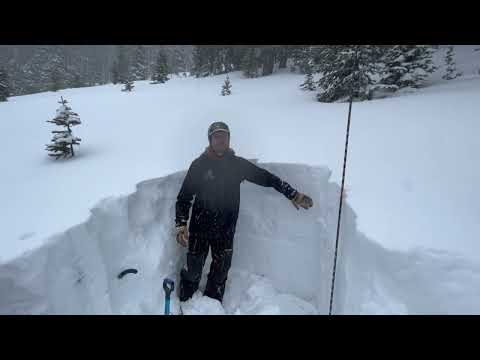 We observed about 50-55cm of new and wind deposited snow on the eastern aspects that we assumed had been from snowfall/wind over the last week.  This new snow layer was generally F hardness.  The new snow was weakly supported by a 3cm thick faceted layer.  The ECTN 11 result was due to this faceted layer collapsing.  The remaining base snow pack was 50-55cm thick and approximately 2F hardness.  We repeated the test 2x in the same pit by digging back and retesting, the faceted layer failed both times without propagation, the ECTN 11 result was clear in the second test, the first test was hard to interpret but allowed us to identify the problem layer.  ECTX result on the remaining 55cm thick base snow layer.

Wind loading produced dense snow drifts that were prevalent along the ridge line, but in the protected east aspect meadows below the ridge line there was much less evidence of denser wind loading.  We did not observe any whoomping either skinning up or skiing down or any signs of natural avalanches.   We skied the east facing short meadow just south of the skillet, then skied the SW facing meadow to the west of the ridge line and lastly skied the skillet to the valley floor.  As someone else reported earlier in the season the bottom half elevation of the run to the valley floor has many exposed downed trees and hidden hazards, personally I won't return to ski there until there is more snow depth at lower elevations.  The SW facing meadow had a supportable suncrust layer, with a mix of 6"-24" of wind drifted new snow depth, depending on where/how the wind had scoured it.

Pretty solid conditions yesterday. Some drifting occurring at the top but better then expected. Pit showed a right side up pack with the usual small layer of facets at ground level. ICT 25, slight but stable wind packed layer on top 2 in. Decent felt really good and conditions felt comfortable enough to ski any aspect on Ellis.

Good skiing on the backside of Lick today.

Dug a test pit on the backside out of curiosity and found 95cm of snow and a ECTN16 score @ 31cm down.

Dense slab that fractured on top of a 1F crust.

The snowpack turned out to be more stable than I had expected. 90cm at elevation with descent cohesion. 10cm of new snow. Compression test resulted in a CTN. Extended column test resulted in ECTX. I am still wary of some wind loaded drifts that could crack or collapse but didn't find any. There is a weak faceted layer about 20cm down that could become a problem with a new load of snow.